I know someone has put a thread about this somewhere, but i couldnt find it... I was wondering if anyone had any info on the history of pole vaulting. I am giving a power point speech on it, and it would be super awesome if i could get some info from everyone here on the board, or as i like to call everyone, "The Greats"
Just you wait...
Top

A history of the fiberglass pole

A fiberglass engineer, Mr. Herb Jenks working for Browning Arms where they were working on fiberglass tubes for Bows and arrows. Developed a stout and lightweight alternative to the steel pole. As vaulters used it he found he needed to build them up stronger to keep them from bending until he was told bending was good. His first innovation was small tapered grip area and then variable weights on poles.

Browning was the first vaulting pole under the SKY-POLE Label Kind of a Natural Yellow Green pole that evolved into a Chocolate Brown Pole SKY-POLE Herb trained Dan Hiedorn of Sky Pole who is still in the business in Costa Mesa. (Talked with him last week). Dan trained Paul Richards now of Altius. Herb, I believe but not sure also trained Steve Chappell at AMF-Voit who is the developer of the SPIRIT pole.

Herb Jenks left SKY-Pole/Browning in about 1968 and worked for Dura-Fiber in Carson City Nevada where he founded Catapole a Black pole with a greater taper than was used on Sky poles. In 1972 the pole companies started using Ã¢â‚¬Å“SÃ¢â‚¬â„¢ Glass a stronger more versatile glass. Sky-Pole adopted the color Blue and Catapole chose Green.
Both color poles were banned in the 1972 Olympics. Not many know this as Sky-Pole kept it quiet and George Moore From Pacer sales printed Full page adds stating the Catapole was the unfair advantage banned by the Olympics but available after the Olympics LOL (He was good at taking a negative and making it a positive) Herb Jenks in 1975 or 1976 went to work with George Moore for AMF VOIT and developed the PACER III Bob Seagran signature pole. A clear pole wrapped in White tape. He at that time developed a patent on a way to increase the hoop wrap on the pole, which aided in faster and more economical manufacturing. The Pioneer of Fiberglass vaulting Poles Mr. Herb Jenks passed away in I believe 1979.

SKY-Pole was sold to Paul Richards and his investor group where he made poles for many World record holders and a private labeled a pole called FiberSport (Blue and Yellow Pole) for Bruce Caldwell; This pole got the 1980 Olympic Gold in Moscow with two World Records.
CATAPOLE went to Ampro Corp. the owners of PORT-A-PIT in Anaheim Ca. and developed the YELLOW Catapole. They too had many World records.

In the first years of the 80Ã¢â‚¬â„¢s Sky-Pole was sold to Harry Gill in Urbana Ill and changed colors to MEAN Green taped clear poles. Catapole equipment went to KC-Fiber and the Teal colored ACCELERATOR Pole that was marketed by a Mr. Dan West formerly from KC Fiber and now with Harry Gill Co.

In about 1987-88 Harry Gill bought the PACER pole from AMF Voit and the workers for PACER started their own pole through Nevada Plastics Corp. called SPIRIT, (

In memory of Herb Jenks) distributed by UCS.
Paul Richards after working for Gill for a few years on Sky-Pole went back to develop his new pole ALTIUS (a Baby Blue pole) with his new equipment in about 1987 and helped to develop the red taped pole Maxima 4 for Bruce Caldwell at FiberSport. Inc.
In 1990, FiberSport Inc., was sold to SSG of Dallas and Bruce Caldwell managed the PORTaPIT Track division 1990 to 1997.
The old Catapole equipment went to Utah a company called ICE/Power-x and the YELLOW CATAPOLE were made for the revived PORT-a-PIT(notice different logo) at SSG for Bruce Caldwell 1994-1996.
CATAPOLEÃ¢â‚¬â„¢S taped white are still being sold through PORTaPIT now managed by Bruce CAldwell Again and CAtapole is now made by Xlogic Sports with all "E" Glass construction.

Part of the original CATAPOLE equipment has been upgraded converted to an entirely different process and which belonged to Essxsport Corp a public company and sold to Bruce Caldwell to form a new comapny Xlogic Sports. Inc. a private company.
ESSX is a White wrapped pole red Flame label and a signature pole by Earl Bell. Earl Bell and Bruce Caldwell are designing these poles. ESSX has the development of it's 10'8" through 16Ã¢â‚¬â„¢5Ã¢â‚¬Â
I love the PV, it is in my DNA
Top

Well, i just finished my speech on the history of pole vault (power point). Yeah you might notice that it is 1:50a.m. when i am posting this. I think its good. Good video, good info. and that is thanks to you guys. So i just thought i would thank you all. Thanks

I did my junior term research paper on the PV last year...included history of the event and equipment, and then changes in techniques over the years. I got an A on it, its much easier to write a paper on someting that you are really interested in

Not that I'm suggesting plagerism, but here is a link to a pdf presentation on the vault.
(99 pages worth)

And just for the fun of it, below is an image of a vaulter at Oregon Agricultural College (now Oregon State University which is in the town where I live), back between 1910 and 1920. Nice facilities, huh!!! 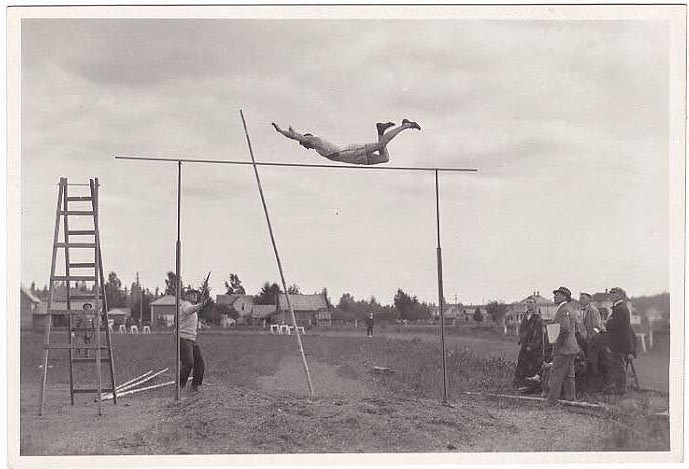 Re: History Of Pole Vaulting

Users browsing this forum: No registered users and 1 guest